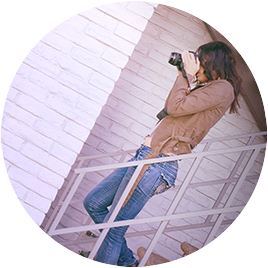 Your essence, no less.

Actress and singer under another name?  I am also a photographer and director under Melss as if I was 2 people switching brains depending on which side of the camera I am on. ;)

Several years ago I began to have fun taking pictures of kids that I happened to see… capturing strong moments both in black and white and in color… recording for posterity those brief moments of childhood which disappear so quickly… too quickly… Far from my mind was the thought that I might put this new hobby to work for a humanitarian cause.

I exhibited in Paris a series of 23 portraits that I took of children in China during the summer of 2007. Having opened November 19th, 2007, the eve of Universal Children’s Day, the exhibit which was originally scheduled to last ten days was extended to a month following public demand. Hundreds of viewers were able to take a look at these giant portraits which measured nearly 6 feet long, and support my project to help promote children’s rights. The exhibition was mentioned in both Elle magazine and Metro daily newspaper… I continued throughout my travels and took more portraits of kids in Algeria and other countries, collecting those looks for a long term book project of kids of every continent.

Which led me to headshot photography later…

When I came to Los Angeles for the first time and needed my own headshots as an actress, I had a great photographer taking them but no agent wanted to use them. They were not showing my best element. Did I waste my money on the photographer? His portfolio was great though. Was it a bad day? What was the problem? At that time I put it all on him, but time, reflection and experience proved me wrong. It’s both our responsibilities: Actor and photographer. The magic has to happen. But not out of luck. Like we say the best improvisation is in the preparation. Same here. Magic is all in the preparation. The actor has to prepare his/her headshot session. It is not only about picking the right photographer. It is not only about the wardrobe. But it is also about how the actor defines his/her essence, and that is a job to be shared with the photographer so the headshot can capture not only your physical beauty but your essence… your market!

After a few marketing for actors classes, and acting classes where they would bring that up… I created a template to prepare my photoshoot as an actress and finally got efficient and great results. Then a couple of actor friends needed help for their headshots. I started guiding them and decided to take my camera and give it a shot. What I did was ask them a series of questions… to find my direction for the photoshoot.  Going through stories and capturing some magic moments, sometimes finding out more about their essence than they would have even imagined about themselves… Each photoshoot WAS FUN and HAS TO BE!!!! But the best moment for me is seeing the smile on their face once I retouch their final headshots. That’s all that made me happy.

So If you feel I can make you happy with headshots showcasing YOUR ESSENCE, NO LESS… Info : contact@melssphotography.com